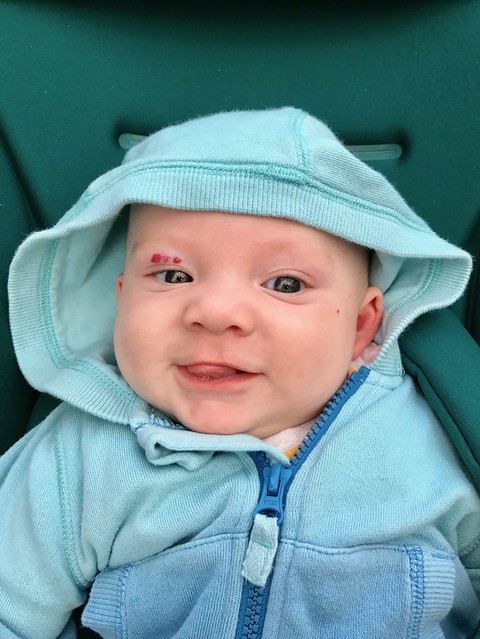 Despite all the bad press, 2016 has actually been a good year for me – mostly down to the arrival of Owen!

My plans for 2016 didn’t exactly go as expected, Jen and I did get to Croyde, but I didn’t get a mountain bike trip to Scotland, nor did I hire a Morgan 3 wheeler – hopefully both are on the cards for 2017!

The year started with Jen’s 12 week scan – our first chance to see Owen! Then the Autosport Show and Leisure Lakes Mountain Bike Demo Day, both of which are regular features in my calendar.

The first few weeks of April were great – a trip to Santa Pod for my first experience on the drag strip. There wasn’t much rest for the MR2 – the next weekend we took it Croyde, a last minute decision, because I wanted to use it as much as possible whilst we were still a twosome! I had brilliant drives over both Exmoor and Dartmoor, we may have been restricted on luggage space, but the decision to take the MR2 really made the holiday for me. After being thrashed up the drag strip and a 600 mile road trip; it was service time for the MR2 – because I had a trackday booked the next month and wanted the car in top shape. The weekend after getting back from Devon, I had motorsport filled weekend: I met my friend Phil and his son William at Donington Park for the BTCC; then the next day I went to the FIA WEC at Silverstone with my Dad.

May started with another weekend away in the MR2 – up to Stockport to stay with our friends Rich and Anna, then over to Bakewell, via the Cat & Fiddle pass, to meet up with Helen and Hayley for Jen’s baby shower. The highlight of May was the track day at Donington Park – my first wet trackday, I had a fun lap following an Austin A35 race car. It dried off in the afternoon and I really felt like I was faster than my previous Donington track day. May was also the start of ante natal classes – things were starting to feel very real!

We didn’t get to our last ante natal class, as Owen arrived on the 6th of June, about 6 weeks early. This was a bit of a shock to us – we hadn’t finished decorating the hall, stairs and landing, let alone started on getting ready for our new arrival! He spent a few weeks at hospital, which felt horrible at the time – we just wanted to get him home, but looking back on his time there, we learned a hell of a lot from the nurses and I think we coped well when we eventually got Owen home! The rest of the year was dominated by Owen; watching him grow and develop into the cheeky little boy he is today – the last few days he seems to be sticking his tongue out at everybody! We have taken him on trips away to Church Stretton – with my family and Weymouth – our first holiday for our little family, where the photo at the top of this post was taken. Owen is the star attraction wherever he goes – especially since learning to smile, which he does a lot!

To celebrate our first wedding anniversary, Jen and I hired a classic Fiat 500 and spent the day touring the Cotswolds, whilst Owen enjoyed some time with his grandparents. In October a got the MR2 on track again, this time at Silverstone – once more I felt like my driving had improved since my previous visit to the circuit. The MR2 also made it into the Pistonheads Carpool in December and I seem to enjoy it more each time I drive it.

On my bike, I was never going to beat my 2,015km in 2015, in the end I only clocked 1,281km in 2016 – about the distance from home to Barcelona. The highlight of which was conquering my nemesis – “Cardiac Hill” at Cannock Chase. Annoyingly, I was 64km short of my friend Partho’s 2016 total – although he did need to ride all the way to Paris to beat me!

Owen is tucked up in bed, and we have a few friends coming round to see in 2017 with us (quietly), so I wish everyone reading a happy new year! It is that weird time between Christmas and New Years Eve where you don’t know what day it is, I actually enjoy it, as I rarely have time off work with nothing planned. So when I saw that a group from the Pistonheads midlands forum were planning an early morning hoon to the Peak District, I ignored my own rule about not driving the MR2 on salty roads and joined them. Fortunately my Christmas gift from Jen was a chassis cleaner attachment for my pressure washer (I had dropped a hint) so I’ll be able to wash off the salt.

It was a clear, cold morning with a heavy frost and patches of mist/fog. The countryside looked beautiful. I should have been out with my camera but I was enjoying the drive too much! The slippery roads meant that the MR2 could easily keep up with the other cars, which ranged from modified MINIs to a Cayman GT4, which sounded awesome. Andrew’s M3, which I was behind for most the drive also sounded amazing.

We stopped for a cup of tea at Flash Bar Stores, in Flash, the highest village in Britain at 1,519 ft above sea level. Whilst we were inside the sun came out, so we retraced our steps and actually got to see what the scenery looked like over some of the twistier roads.

I did 150 miles in the MR2 and loved every moment of it, now all I need to do is clean it…

Owen was lying on our bed whilst Jen was getting ready, I noticed that some lovely winter light was coming in through the window and grabbed my camera. I’m pleased with how these have come out, they will be going into a triptych frame that we got for Christmas.

My MR2 made it into the Pistonheads Carpool!

Following on from my MX-5 making it onto the pages of eve magazine, my MR2 has made it onto the front page of Pistonheads. I’d written the text a while back, but only collated the photos and submitted the article recently, so was surprised when my phone started buzzing with tweets to let me know my car was on Pistonheads.