Otherwise known as Daddy Daycare! I have finished work for 9 weeks to spend some time with Owen, as my wife Jen is off back to work after her maternity leave. As I mentioned in my looking forward to 2017 post, we can do this due to some relatively new legislation – in fact I am the first person from my work to opt for this. As it is still uncommon for Dads to take parental leave, I thought I would do a series of weekly blog posts with my thoughts on the experience, what we have been up to and use it as an excuse to share more cute pictures of Owen!

Our first week is already looking busy, with a visit to Birmingham Children’s Hospital – to be combined with an exciting lunch out and possibly Owen’s first trip on a train. We’ve also got a day out to visit my parents planned and the small matter of tasks from Jen’s handover document…

Before we get to that though, we will be spending the weekend in Chester, as our friends Rich and Anna are getting married. This will be our first wedding as a family and we have got Owen a little suit to wear – hopefully he doesn’t steal too much attention from the bride!

The annual Leisure Lakes Demo Day at Cannock Chase is the highlight of my mountain biking year – it is a chance to check out the latest kit, and try a few bikes on trails I know fairly well. As I don’t need to take my own bike, it means I can drive to Cannock Chase in the MR2, which makes it even more fun! 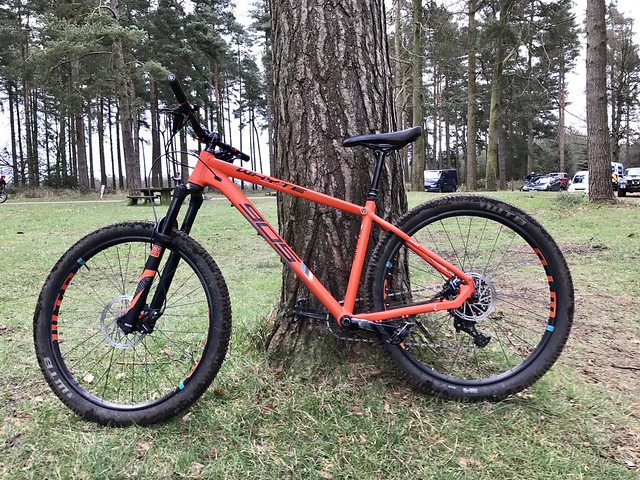 After signing on I went to the Whyte stand, as the T-130 was top of my list of bikes to try. Unfortunately they were all out being ridden, so I opted for a 905, which is a much better version of my current bike. I thought it would be a good bike to base all the other reviews on. The 905 did feel better than my bike, but the SRAM gears took a bit of getting used to. I was struggling on the bumpy trails, especially the long rooty section at the end of the lap, I thought I was just unfit/out of condition, but didn’t have the same issues on the full suspension bikes I rode later in the day. If I was looking to replace my current bike, the 905 would be a top contender. 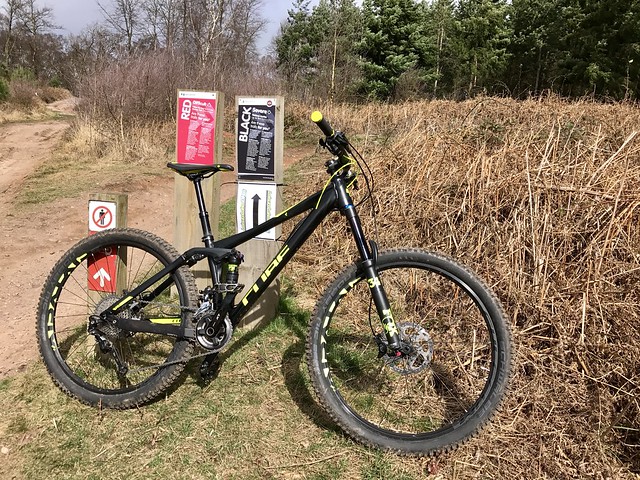 The 120mm travel version of this bike is high up my list of possible next bikes, but they only had 29” or 140mm suspension versions to demo. I opted for the 140mm 27.5″ wheeled model to demo. I rode last years version of this bike at the previous demo day. I was on the 16” frame version, which felt quite compact, I later sat on the 18” version which fitted me well – this isn’t always a given, as I have a long body and short legs.

Dropping in to the Son of Chainslapper section, which is a lot bumpier than I remember, the Cube felt so much more planted than either the Whyte 905 or my hardtail. Within seconds I knew my next bike would have both front and rear suspension! What I hadn’t expected was how much smoother the rooty climb would be on a full suspension bike. I arrived back to the demo area feeling a lot better than after riding the Whyte 905 and it wasn’t just down to the 2×11 gearing! On the subject of gears, the Cube was the only bike I rode with Shimano gears, it may be down to familiarity, but I just cannot get on with SRAM shifters. The downside to the 2×11 setup was that the dropper seatpost lever wasn’t easy to reach, on a couple of occasions I went for the left shifter instead of the dropper post. 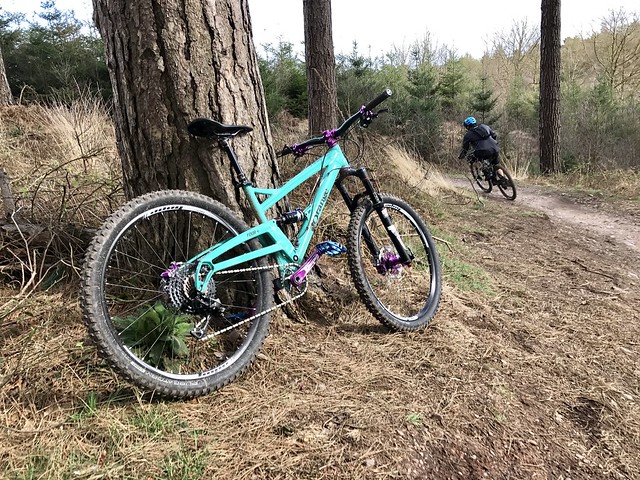 After lunch I planned to take a walk around the various stands, but spotted an Orange Four on the Hope stand. An Orange Four, especially one dripping in Hope bling is my dream bike. As it was in my size it would have been rude not to see if it lived up to my expectations! Aside from the colour, the only thing I would spec differently would have been Shimano, rather than SRAM transmission. I could feel the quality of the bike from the first few pedal strokes and it was a dream on the rough downhill sections. It also climbed as well as the Cube, despite only being 1×11 – the Hope 44 tooth cassette helped there! I must admit that when I got home I had a look at the Orange website to see if I could afford a lesser specced Four – unfortunately even the cheapest model is significantly above my budget. I have certainly found a bike to benchmark all other potential new bikes against though! 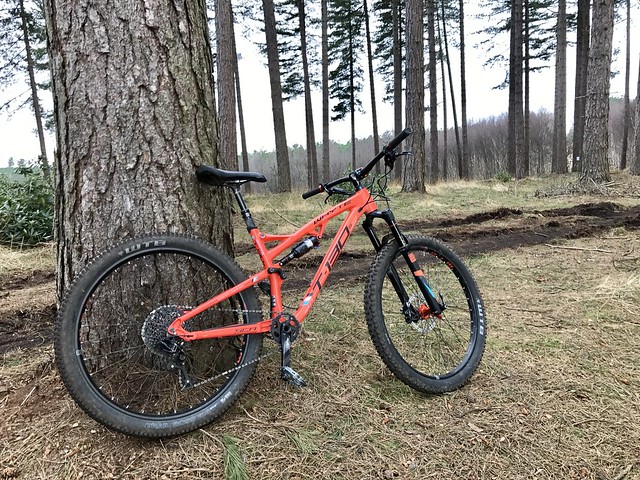 My fourth, and final, ride of the day was on a Whyte T-130s, I had high expectations for the full suspension Whyte. These were compounded by the fact it took my three visits to the Whyte stand to find one in medium, which I thought would be my size. Unfortunately, the medium frame was too big for me, the seat wouldn’t go low enough. Luckily I was able to take our a small frame instead, however it felt ever so slightly cramped. I don’t know if it was how the suspension had been set up, but the rough sections, especially braking bumps, didn’t feel as smooth as with the Orange or the Cube, yet it managed to feel bouncier than either on the climb. I don’t know if riding the T-130s after the Four had recalibrated my expectations, but I found that the Whyte didn’t live up to the hype.

I don’t think I’ll be buying any of these bikes, unless I win the lottery, in that case I’ll have an Orange Four, with all of the Hope bits. However, I have got a much better idea of what I want when I start bike shopping in earnest – short travel full suspension with Shimano 1×11 transmission and a dropper post! 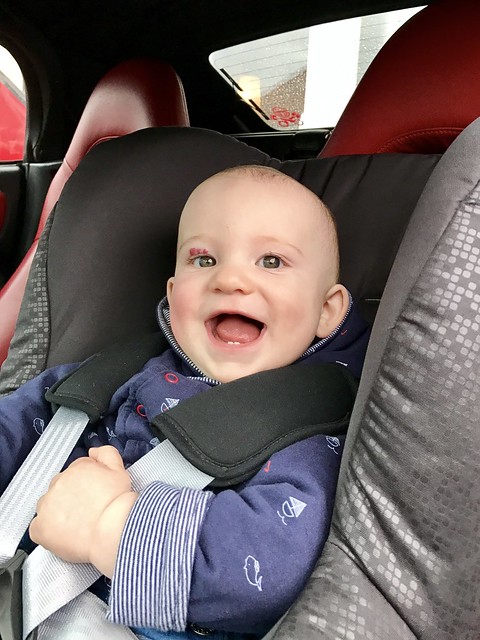 The last few weeks since my visit to Prodrive seem to have been non stop in all aspects of my life – I have a few things to blog about and others will come to light soon. However, today was an important milestone for Owen (and me) – it was Owen’s first ride in the MR2! I had been excited about sharing my love of sports cars with him ever since we found out we would be having a baby, so I was relieved that Owen seemed to enjoy it. I think he especially enjoyed being sat next to me and able to see where we were going.

One project I have been working on recently is this blog – you may be able to see a few subtle changes, but the big one is that I have moved it to a new server (Amazon EC2 for any other geeks reading), so there may be a few glitches to iron out. Once those have been sorted there will be a few more tweaks and updates.

I haven’t been doing too well on the goals I set myself in my new year post, although my weight has been less than 90kg for over a week, so I’m on my way to the first goal. Hopefully after that some of the others will start falling in to place.