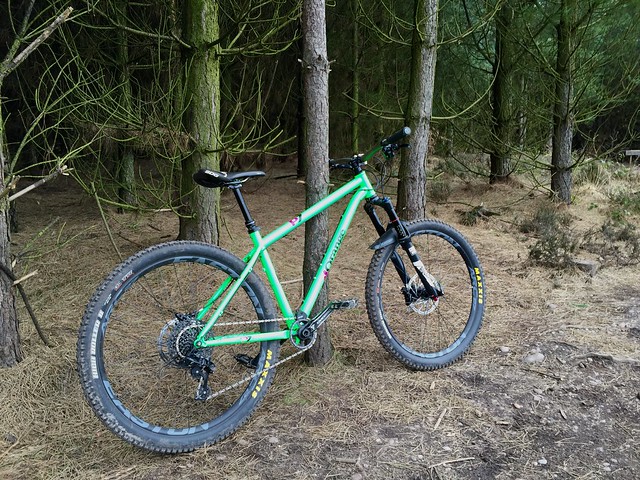 As I had such a good time at the Leisure Lakes Demo Day last year, I made sure that I would be attending this year too! When I got there I went straight to the Orange stand, hoping to try a Four – seemingly along with everyone else! When I got the front of the queue all they had in my size was a Crush, keen to get out I took it for a spin. I enjoyed the bike and seemed to get a lot of PRs on Strava, although looking at the trace when I got home it seemed a bit fishy, skipping a few sections out. Dropping the Crush back I clocked a nice looking P7, which I didn’t realise Orange had brought back.

The next bike I wanted to try was a fat bike, I’d noticed Cube had some, but the person in front of me took the last one out. Gutted. I settled for a Stereo 140 Race, which is a potential next bike. The spec was good, full XT 2 x11 and a dropper post – my next bike will have one of those! This being only the second time I’ve ridden a full suss bike, it was a lot smoother than the hardtails, especially on braking bumps. There was one section, into and out of a dip where the Cube was the only bike I didn’t lose traction on and made it up the other side. The bad point was all the pedal strikes, I was on slightly chunky DMR V8 pedals, but the pedals were striking way too often. I didn’t notice strikes with the other bikes.

I headed back to Orange to try my luck getting a Four, but settled on the P7 I’d spied earlier. Not having ridden a steel framed bike before, it was interesting to test one with almost the same geometry as the Crush I’d ridden earlier. The spec on the P7 was better though, SRAM 1×11 with Pikes and a dropper post. The SRAM shifter took some getting used to, but not enough that I’d rule out a bike because it had SRAM. The P7 felt more fun than the Crush and even had me thinking that an expensive hardtail would be a better bet than a cheap full suss for my next bike. It was also the only bike I took a picture of.

The event seemed better organised than last year, especially signing on. The route was better too, with less fire road, although the long rooty section was particularly energy sapping. I’m not any clearer on what my next bike should be an I didn’t intend on writing that much, but it was a fun day out.