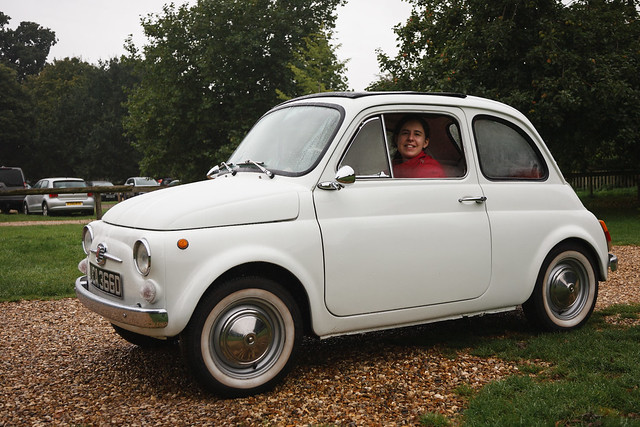 To celebrate our first wedding anniversary Jen and I hired this little Fiat, and spent the day pootling around South Warwickshire in it. Jen has got her own modern 500, and both of us love the 1950s classic, so when I found out that Great Escape Classic Cars have one available to hire, a plan was formed.

The 1966 model is a lot harder to drive than the modern version, especially as this one was LHD. Both brakes and steering are unassisted, the 4 speed gearbox didn’t have synchromesh so double clutching was needed. Top speed was 40mph – you wouldn’t want to go any faster!

We both enjoyed our trip in the little 500, it could have been a case of “never meet your heroes”, but it wasn’t at all. Despite the trickiness to drive we would buy one if we had space for another car, even a really small one. 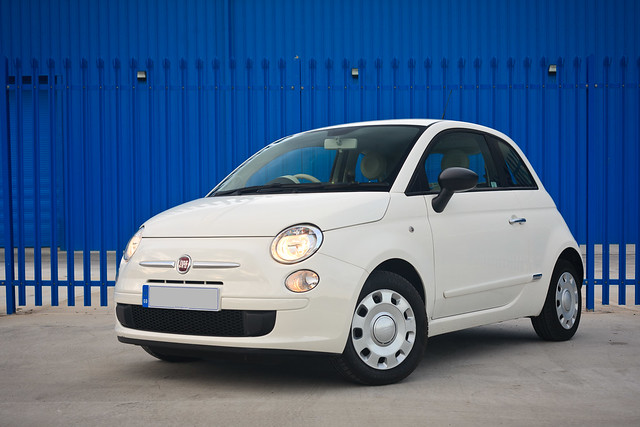 I wasn’t going to post this photo of Jen’s Fiat 500, as it was more of a test shot, due to the light not being perfect, but every time I see it on my phone or Flickr it makes me smile, so thought I’d post it anyway! Cleaned & waxed 500, a photo by Lewis Craik on Flickr.

After washing Jen’s 500 I decided to take a quick picture of it on my iPhone and post it to Flickr/Twitter.

Rather annoyingly within a few hours it had more views than all the pictures of my new MX-5, although that was possibly something to do with a retweet from Polished Bliss.

The little Fiat will be getting a proper photoshoot soon though.

Unlike at Silverstone, Ma5da Racing were part of the BRSCC programme, as the lead series!  The other series there are the Alfa Romeo Championship, Motor Lawyers Fiat Challenge, Mighty Minis, Super Mighty Minis and the Dunlop TVR Challenge.

In the Alfa Championship, Tim Lewis was back with his bright Alfasud, although it was having gearbox trouble during the race.

Adie Hawkins won both races in his 33 and even though it isn’t technically perfect I really like this shot taken from the banking of him breaking for the Hairpin.

This was the first time that I’d seen Minis racing and I was treated to 2 great races. The Mighty Minis were up first, I shot this race from the inside of Hall Bends and managed was able to get some frames with the top 4 cars all in the same frame, Minis are great! The pink car of Chris Morgan won the race.

The racing was just as tight in the Super Mighty Minis race, which I shot from the same position as the second Ma5da Race, Nev Fitzpatrick won this race.

Having the driver’s name on the front grille of the Minis is great, much more fun than just numbers, the Ma5da Speed team have a similar thing going on with numberplates, I think other series/teams should follow, after all it is about having fun at this level of motorsport!

Like Ma5da Racing there were two Fiat races, both were close, with the usual suspects from last season not at the head of the the pack. The first race was won by Steve Twist who managed to pull out a 6s lead on the last few laps.

The second race wasn’t to be for the number 11 Fiat, it was involved in a fairly hefty shunt which caused the race to be red flagged. The restarted race was won by Mark Smith, in another Uno, proving that the newer Puntos, including the HGTs aren’t as good as their older cousins.

Lastly the TVRs, they were meant to have 2 races, but after the first got red flagged twice, they ended up with one, which was won by the bright green Tuscan of Danny Winstanley, it was good to see some of the older “wedge” TVRs racing and as ever the TVRs all sounded great!