Monday Service? You may be thinking that it is usually a Sunday Service… The reason for the Monday Service is that there was a Sunday Service scheduled in March, but snowpocalypse happened and it was moved to Easter Monday instead. Unfortunately, despite it now being April, the weather wasn’t that much better, with a lot of the country under snow and suffering from general traffic chaos.

It wasn’t that bad in the Midlands, it was just very wet. So, much like last year, I led a convoy of cars down a very wet motorway to Silverstone and drove carefully around a wet track. What was different is that the circuit had been resurfaced, so there was less standing water, with the exception of Brooklands corner, which was very wet. Given the conditions I was taking things easy – I would rather be slow than in the gravel trap/pit wall. I still had fun and even managed to do some overtaking, albeit only a replica A-Team van! There was a red flag towards the end of the session, after a Caterham had got stuck in the  gravel trap. I was first back into the pits and lined up ready to go out again, but everyone else, bar two other cars, decided to call it a day. So when the track re-opened there were only three of us out! The clip above is from one of these laps – as you can see I had no traffic. Perfect!

I’d met my Dad and his friend Mark, for breakfast before going out on track. I then convoyed back to Chipping Norton with Dad, where Jen, Owen and my Mum were waiting for us. We spent a lovely afternoon all together, followed by possibly the best meal I have ever had – Mum’s roast gammon with corn in cheese sauce and Jen’s Creme Egg brownies with ice cream. By this point the weather had improved enough to drive home with the roof down. A great end to a bank holiday!

Being at Silverstone for the WEC race reminded me that I hadn’t blogged about the Pistonheads Sunday Service I’d attended at the circuit last month. It was similar to the event I attended last year, except it was wet. Very wet. I was leading the convoy of cars down from the Midlands forum and had to slow right down on the M40 due to standing water.

The weather wasn’t much better at Silverstone, with the first track session being cancelled. By my session the rain had stopped and the track was mostly dry, except for a river across the track where the access road to the international paddock cuts across the National Circuit, between Becketts and the Wellington Straight. Copse corner was also extremely slippery, it felt like the MR2 was understeering, but was ready to snap into oversteer at any moment. It took some delicate balancing on the throttle to keep on the track. I found it a lot trickier than the wetter trackday I did at Donington Park last year. The wet weather seemed to have put people off attending, so I managed to get some relatively clear laps, including the one in the clip above, and coping with different track conditions is all part of the fun!

When the MR2 had its MOT test recently the tester pointed out that it really should have a suspension overhaul before I do any more trackdays. Following on from the big bill on the BMW and my plans to buy a new bike, that may have to wait until next winter, so this short session at Silverstone may be my only track action this year.

Since Owen was born I haven’t been able to get out in the MR2 much, so when Pistonheads announced another one of their Sunday Service events at Silverstone, I had to go.

Rather than driving straight to Silverstone, a few of us met up between Coventry and Birmingham to drive down together. I’ve joined a few of these convoys previously, but this was much bigger – around 30 cars, ranging from my MR2 all the way up to a Porsche Cayman GT4 and a brace of Italian supercars. We took the scenic route to Silverstone, somehow managing to arrive all together, despite the group splitting up and following different routes. I made a time-lapse of the drive.

At Silverstone I met up with my Dad for breakfast and some tyre kicking, before heading out on track in the MR2. I had driven the National Circuit at Silverstone a few times previously, but I felt like I was faster than before, I expect that this is due to having a few more trackdays under my belt in the MR2. I really enjoyed myself, the driving standard was better than the same event last year, where Jen drove the MR2, and I was surprised to have the track pretty much to myself for the last few laps – perfect.

To finish off a great morning I followed my Dad back to his house – via the cross country route. I has been a long time since we’d both been out together in our sports cars, and driving together through the Cotswolds, with autumn leaves being kicked up by Dad’s Boxster in front of me, was just as enjoyable as convoying with the supercars or taking the MR2 on track earlier that morning. Including driving back to Coventry I did 170 miles in the MR2 and I can’t think of a better way to use 2/3rds of a tank of petrol. 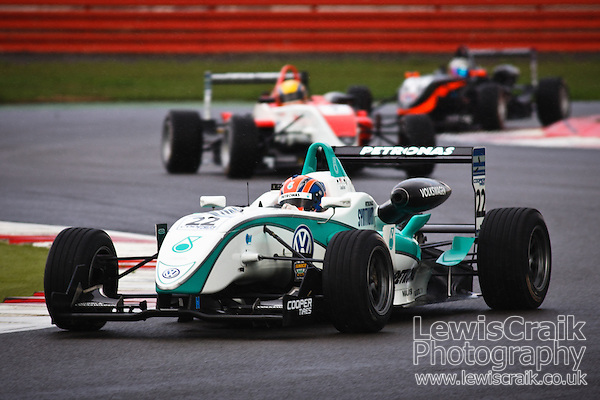 I was looking through my email the other day and found that I’d sent this image to someone – I didn’t even remember taking it! As soon as I saw it I knew why I’d emailed it, the brightly coloured cars with the gloomy light (it looks like it was raining) and the, rare for Silverstone, clean background.

I was covering Ma5da Racing, which was one of the supporting  series at the British Formula 3/British GT meeting at Silverstone in August 2010, so other than this and the Ma5da Racing images (available in my archive) I hadn’t processed any extra shots. The driver is Jazeman Jaafar (Malaysia) driving for Carlin.

Browsing around Flickr I came across quite a few light trail images, which reminded me of a few images I took at Silverstone, when Ma5da Racing were supporting the Silverstone 500 in 2009, this one is my favourite.

Silverstone Light Trails, a photo by Lewis Craik on Flickr.

It was still quite chilly and the track was damp for the first qualifying/practice session of the 2009 Ma5da Racing season, much like the test day earlier in the month. I started the session at Brooklands, infront of the BRDC stand and witnessed a few spins early on in the session. It was also good to see some new competitiors (and of course competitors from the 2008 season, but with new cars/paintjobs).

It had warmed up a bit by the time the Ma5das came out for their first race, for this session I headed round to the Abbey chicane, but unlike the test day, I was able to get trackside for some lower angle shots. After a long winter break it was good to see the field of 30+ MX-5s coming straight at me nose to tail at racing speeds.

Another thing that hadn’t changed from 2008, was T0m Roche being the fastest man out there, leading from the front to win the race. For most of the race he was being chased down by Scott Kirlew and new guy Rob Boston, in his distinctive yellow and black car.

The early intervention of the safety car made sure that that the pack was closed up for most of the race, although I’m sure it still would have been close racing without any outside help!

For the second race, weather played more of a part, rain had been threatening all the way into the lead up to the race, but only a few spots actually fell during the race. For this race I positioned myself at Luffield and moved round towards Woodcote, which is really the bread and butter of shooting at Silverstone. The location did not disappoint, with lots of action throughout the race. Although the action really started before the cars even reached the complex with both cars on the front row having problems, 2nd place Carl Powell had car trouble and after a slow lap pulled in to the pits and pole sitter Tom Roche fell off the black stuff and rejoined in 18th place. Amid the chaos experience proved to be the winner with Steve Greensmith and Paul Sheard coming through first and second. Meanwhile, the usual suspects from 2008, Jonathan Greensmith and Tom Roche, were both on a charge coming up through the field.

Carl Powell about to be lapped by the leaders - Luffield

Having passed everyone else the last few laps returned to a classic Greensmith – Roche battle, with Jonathan managing to hold on to the lead for the chequered flag.

There was even a guest appearance at the end of the race!

I'm sure that body kit is against the regs...

Last week Ma5da Racing had their pre-season test/media day at Silverstone, before the first round of the championship there on the 28th March. I tagged along to get some photos for them, it was good to be back shooting motorsport again, after what felt like a very long winter break, which was infact only a few months long.

I started the day at Priory, as by the time I’d waited for the circuit office to open and said hello to various people there wasn’t much time to get a good location, so Priory, next to the paddock had to do for the first of 4 sessions:

As the International circuit was in use, which was a first for me at Silverstone, I decided to take a wander round the far end of the circuit to try some new angles, at the end of my wander I found myself at Bridge corner, which is part of both the International and GP circuits, another angle I’d not shot from before. In addition to some decent slow pans as the cars came round Bridge corner there was the added compositional element of the bridge itself:

For the third session I went to Abbey and climbed the terrace to shoot over the catch fencing. On the full GP circuit Abbey is pretty much just a straight, but on the International circuit, it is a hair pin:

For the last session of the day I headed to Luffield, a corner which I’ve always avoided at Silverstone, due to all the other photographers being there, but since I was on my own I decided to try it out. I was quite pleased, I was able to get shots of both the entry and exit of the double right hander, so may give it another shot when I return for the race at the end of this month. This shot from Luffield was my favourite shot of the day: