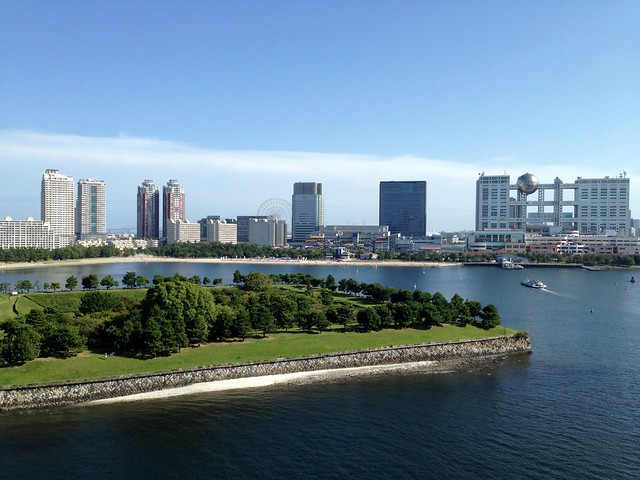 I originally wrote this post on a flight back from Japan a few weeks back, but didn’t get round to posting it with the excitement of being back home. I’ve just found it in the drafts folder, so thought I’d press publish!

I have been over in Japan for business again and had a weekend free in Tokyo with my boss and his boss.

On Saturday we visited Tokyo Tower – which looks like the Eiffel Tower, but white and red. We went to the highest observatory, at 250m and had a great view over Tokyo. We got to the top just as it was getting dark and the city’s lights were turning on – perfect timing! The best light show of the evening was over the rainbow bridge on the artificial island of Odaiba – so we decided to spend our Sunday there.

Our first stop on Odaiba was Tokyo Megaweb, although we got there a bit early, so killed time by going on the big wheel next to it. That is the big wheel on the photo at the top of this post. This was actually a good move, as the big wheel is one of the tallest structures on Odaiba, we had a good view of not only the local buildings, such as the Fuji TV building, but also over the rainbow bridge to the main areas of Tokyo. We had gone up in a clear capsule, which was great for all round visibility, but slightly too hazy to be worth taking photographs out of – so all I can do is recommend that you check it out if you’re ever in Tokyo!

By the time we’d been round on the big wheel Mega Web was open, we had a look at the new Toyotas, before going to the classic garage at the other side of the shopping centre. I was surprised to see that the exhibits had been rearranged since my visit earlier in the year. A Ferrari Dino 248 had been added, which was one of my highlights, along with the Toyota AE86, Lotus Élan and Fiat 500.

After spending the morning looking at cars we had lunch, before walking to the rainbow bridge, via the Statue of Liberty and the beach! The mile long walk over rainbow bridge is another great way to get a view of the Tokyo skyline, especially as it is free! We decided we would walk over the bridge and back so we could see from both sides, we went via the south side, with views over Odaiba and the bay and returned on the north side, which faces the city. The photo at the top of this post is from the way out, looking back towards Odaiba, the building on the right of the shot is the Fuji TV building – apparently the ball is another observatory, which I will visit on my next trip to Japan.