After enjoying the party in Scarborough our last stop was York, where we spend a lovely few hours catching up with friends, before pointing the MR2 back down the M1 towards Coventry.

Whilst the MR2 isn’t the best GT car, and in Jen’s opinion has nowhere near enough luggage space, I feel like it was worth the compromise. Driving wise I enjoyed this trip more than our previous trips to Scotland in my mk3.5 MX-5, the MR2 really came alive on the Scottish roads. It is now tucked up in its garage, waiting for the next road trip, or at least a blat round the local lane. 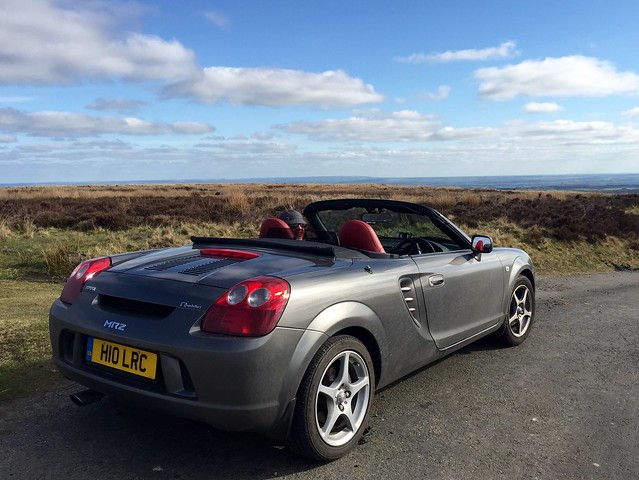 Before we loaded up the MR2 for the first leg of our journey south, Jen wanted to take part in the Perth park run, a timed 5km race around the North Inch park, next to the River Tay. I went along to watch, and Jen put in a decent time.

After all that running (and watching) a treat was required, so our first stop was at S Luca’s ice cream parlour in Musselburgh- a favourite of my Dad from his youth, which is still great today! As ever, the detour was worth it!

Jen drive the second stint from Musselburgh, down the east coast on the A1 and across the border to England. This part of the country is often skipped by more direct routes, but looked absolutely stunning in the sunshine. I then took over for a double stint to get us to Scarborough, via the Tyne Tunnel, Teeside and the North York Moors, where the photo above was taken. Although not quite as impressive as the Scottish Moors, it was great to see the moors in the glorious weather we had yesterday. Much better than our previous visit in the MR2, where we could just about see the end of the bonnet. It was slightly disconcerting to see the sheer drop to the side of the road, which we hadn’t been able to see in the fog last time!

In Scarborough we met up with Jen’s family and celebrated her cousin’s 50th birthday at the local cricket club. 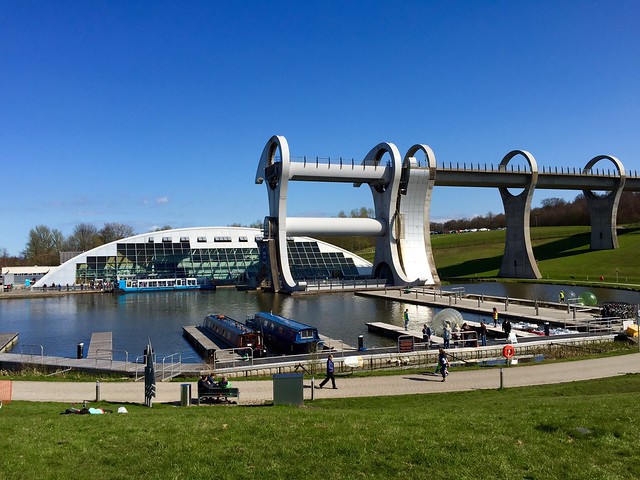 After breakfast on day four we packed up the MR2 to return to Perth, on our way out of Wester Ross we stopped at Plockton, which despite being on the west of Scotland faces east, the sheltered location actually means that palm trees can grow and there were quite a few dotted around the village.

From Plockton we joined the A87 then A82, which we followed down to the Nevis Range near Fort William, the only Scottish ski hill I’d not previously visited. I was very impressed with the mountain bike facilities they offer, the lift served, red graded XC trail sounded particularly interesting – I need to bring my bike to Scotland in the future!

Next we met one of Jen’s friends for lunch before hitting the so called Scotsburgring around Loch Leven. The road around the loch used to be the main road, but has now been bypassed by a bridge, so I practically had the twisty road to myself. I was enjoying the road so much I didn’t get a chance to stop for a photo, somehow Jen managed to sleep through most of the lap too. If you’re even on the A82 between Glencoe and Fort William it is well worth taking the old road around the loch, if you enjoy driving you won’t be disappointed!

The traffic gods were on our side for the next bit of road, up Glencoe and over Rannoch Moor, we had a clear road and stunning views in front of us. We seemed to have used up all our luck with the traffic on the prettiest bit of road, as when we turned onto the A85 towards Perth we got stuck behind a succession of slow moving vehicles all the way to Perth, which was especially agonising as we knew there was a haggis supper waiting for us on arrival! It had been a long day on the road, and I’d even managed to get sunburnt, in Scotland, in April, but the haggis supper, washed down with a can of Irn Bru was a perfect end to the day!

Day five was a rest day in Perth, to spend time with my parents. The morning was pretty chilled out, we had a mooch around town, with tea and cakes at a new cafe in a furniture shop – much better than it sounds. After lunch, which was smoked salmon we’d brought back from Shieldaig, we all got into my Dad’s Mercedes convertible and went to a trip to the Falkirk Wheel. At least the MR2 was having a rest! The Falkirk Wheel was worth the journey, it is a rotating boat lift, linking two canals, which were previously linked with a flight of eleven locks. The structure itself is an impressive feat of engineering, standing 35m tall, meeting an aqueduct jutting out from the hillside. The land around the basin at the bottom of the lift has also benefited from redevelopment and was full of people enjoying the sunshine. Of course, they were offering boat trips to experience the lift and as we’d gone all the way there it would have been rude not to go on one! Going up the lift was good, but on the return journey it was surreal to be going along the aqueduct into what looked like thin air! Fortunately we didn’t sail over the edge and the lift deposited us safely back in the lower basin. 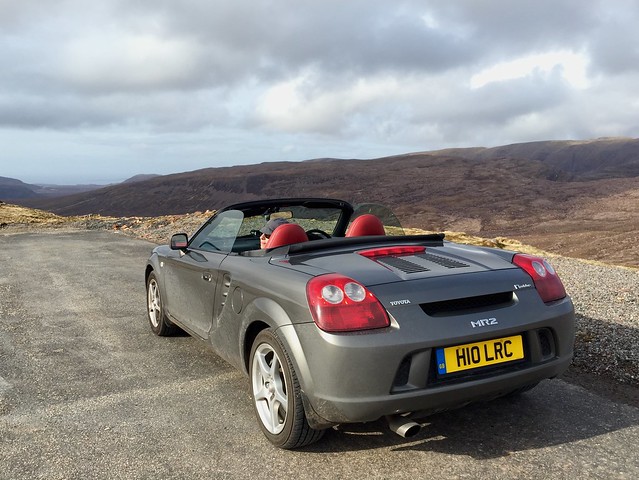 After a tasty breakfast we dropped the roof on the MR2 and set off towards Applecross via the Bealach Na Ba, the road with the greatest climb in the UK – sea level to 2,053ft. By the time we’d got to the bottom of the pass we’d already stopped to put the roof back up as it was raining. This set the scene for the day, I lost count of how many times the roof went up or down. As we climbed up the pass, the rain turned to snow, not what we were expecting!

By the time we reached Applecross the sun was out again, we went for a light lunch at the walled garden, before exploring the grounds of Applecross House on foot. From Applecross we followed the coast road round to Shieldaig, briefly interrupted by some highland cows in the road. Again, we managed to time our arrival to Shieldaig with a gap in the weather, we sat outside the new Nanny’s shop having an ice cream in the sun – perfect!

We returned to Applecross, via the Bealach Na Ba in much nicer weather, for dinner at the famous Applecross Inn. It was good to see that so many of the items on the menu were sourced from around the village. I can confirm that the local scallops are very tasty. We retuned to our chalet in Lochcarron, but this trip over the pass had an audience – the local stag population were lining the road, much to Jen’s excitement. 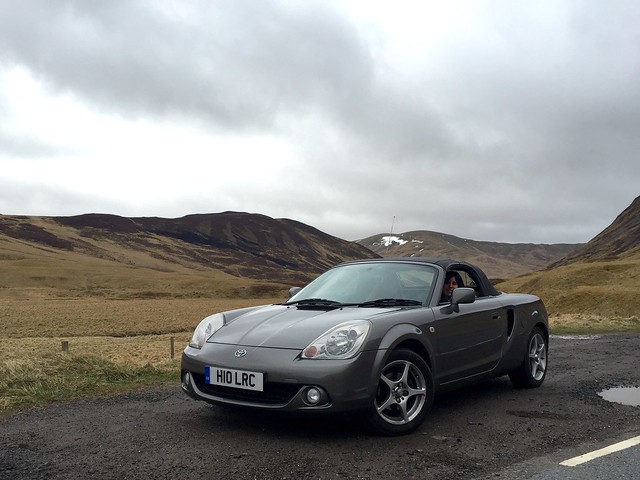 Our first proper day in the highlands started off very much like our 2012 trip, along the A93 and A939, past Glenshee and The Lecht ski hills. This is the route Evo magazine made a film about, and although I didn’t have an Aston Martin, I really enjoyed the drive – the MR2 was made for roads like these!

After the excitement of The Old Military Road, we stopped in Grantown on Spey for lunch, I went for that finest of Scottish delicacies – the macaroni pie! Tasty. Our next stop was at the Tomatin distillery, just off the A9. The plan has been just to pop into the shop, but we ended up on a very surreal tour with a coach load of French tourists, then a separate private tour/tasting and a sample of their 1988 malt to take away with us (which I’m enjoying as I type). The remaining boot space in the MR2 was also filled with purchases from the gift shop.

By this time we were running late, so drove past Loch Ness to our overnight stop at Lochcarron. The drive past Loch Ness and on towards Kyle of Lochalsh, then round Loch Carron would have been better without the rain, hopefully our return journey will be better. For those interested, we didn’t see Nessie, which I’m also going to blame on the rain, even the hardiest of Scottish mythical monsters wouldn’t have wanted to be out in it! 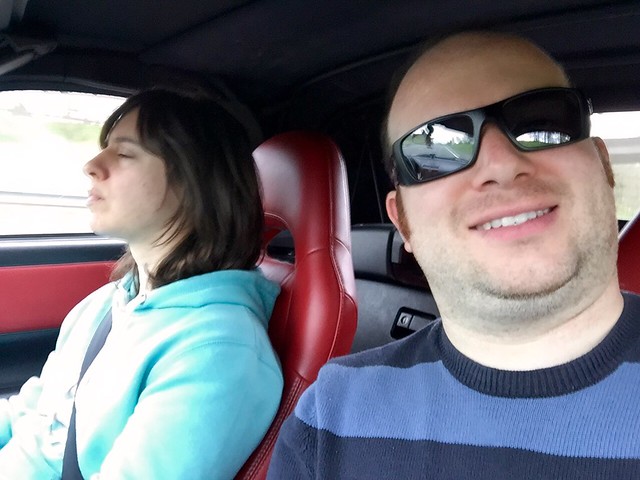 The first day of a Scottish roadtrip is always the long slog up the M6, fortunately the traffic was good today and we made it up in under 6 hours including stops.

As our itinerary for the week includes some of the best driving roads in the country (and possibly the world) I’m particularly excited to be driving the MR2, it isn’t the most refined car, but should come alive on the highland roads. On the other hand, Jen doesn’t really understand why “we are going on holiday to a country where it rains all the time, in a car she can’t fit all her luggage in”…